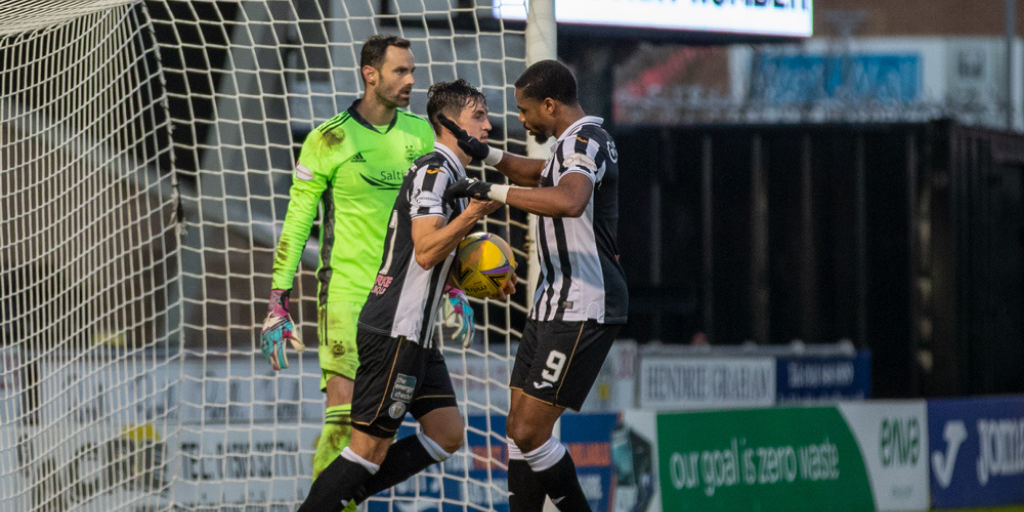 St Mirren had to settle for just a point despite a dominant display against 10 man Aberdeen this afternoon.

The Buddies had a host of chances against Derek McInnes' side but couldn't find a winner after Lewis Ferguson was sent off early in the second-half.

Just like last week's win over Aberdeen, Saints started well and fashioned the first chance with just three minutes on the clock after a neat passage of play. Ethan Erhahon fed the ball to Jon Obika on the half-way line with the forward flicking into the onrushing Ilkay Durmus. The Turkish winger broke forward before lashing a shot towards the top corner which Joe Lewis had to be at full-stretch to tip over.

Dylan Connolly should have opened the scoring on 10 minutes. The Irishman was picked out in space by his compatriot Jamie McGrath but slammed over from close range.

Connolly went close 10 minutes later when he was sent racing clear on goal by McGrath. Aberdeen goalkeeper Lewis was out quickly to narrow the angle along with Greg Leigh. Connolly got his effort away but was denied by the legs of Lewis.

On the half-hour mark Saints had another opportunity. McGrath's corner was headed out only as far as Durmus who caught the volley sweetly, but it was straight at Lewis who pushed over.

Despite having the better of the chances it was the visitors who took the lead. Jonny Hayes managed to find space at the back post to meet Matty Kennedy's cross to head home.

It wasn't the scoreline that Saints merited for their first-half display, but just before the break the Buddies were given a chance to level from the penalty spot after the ball came off the hand of Tommie Hoban. McGrath stepped up and sent Lewis the wrong way to score his second in a week against the Pittodrie side.

Aberdeen were dealt a blow early in the second-half when Lewis Ferguson was given his marching orders following a second yellow card.

Saints looked to press home the man advantage and created chance after chance. Substitute Cammy MacPherson curled a free-kick just wide two minutes after his introduction, while Conor McCarthy was inches away from getting on the end of a wonderful Durmus cross two minutes later.

On 70 minutes, St Mirren had two chances in a minute. MacPherson was at the heart of both - first slipping Durmus in with a super touch only for the winger to tamely strike into the arms of Lewis. Then the goalkeeper spilled MacPherson's low drive, but McGrath couldn't turn home the loose ball.

With five minutes remaining MacPherson was so close to the winner when he curled towards the far post. It looked like it was creeping in but went agonisingly over.

Aberdeen had a big chance to snatch the win on 87 minutes. The returning Joe Shaughnessy missed a clearance which allowed Curtis Main to slide in Ryan Edmondson. The striker ran through into the Saints box but shot straight at Jak Alnwick.

And then twice in injury time it was St Mirren who should have found a winner. Kyle McAllister slid the ball through for Richard Tait whose shot was blocked by Lewis and then, with almost the last kick of the ball, Lee Erwin should have burst the net but had his effort blocked on the line by the Aberdeen defence.