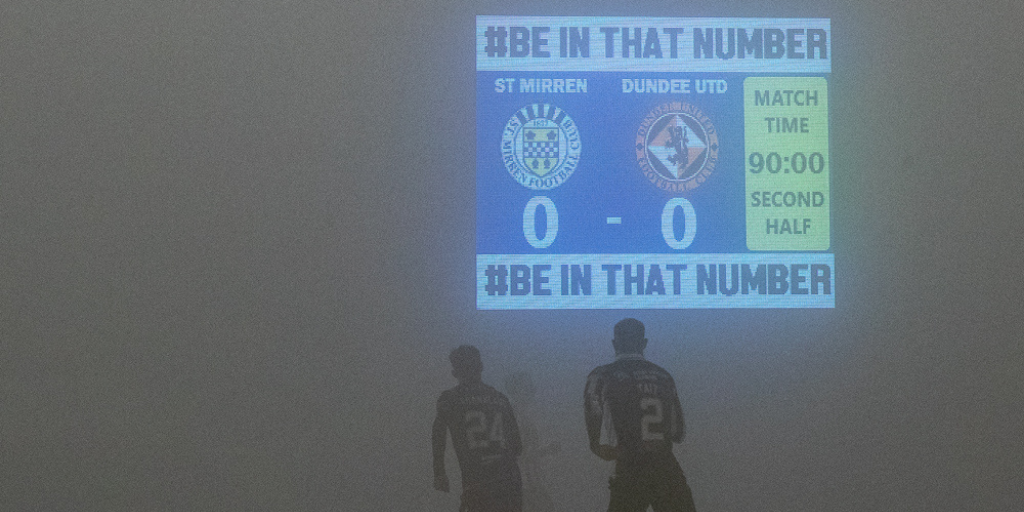 St Mirren were held to a goalless draw by Dundee United as the Buddies returned to action for the first time in almost a month.

Jim Goodwin's men had the better of the 90 minutes but couldn't find the goal that would have given them a deserved three points during a foggy night in Paisley.

Saints were in control of the first half with the first real opportunity coming on 17 minutes. Debutant Brandon Mason, who joined up with the squad earlier this week, sent in a terrific ball from the left which found Jamie McGrath in space inside the United box. The midfielder got his shot away but it was deflected into the path of Richard Tait who looked certain to open the scoring but for a vital block from Dundee United defender Jamie Robson.

For all of St Mirren's possession, it would take the home side until the 35th minute to create another good chance. Tait went so close when he got the slightest touch to Kristian Dennis' flick-on but knocked it wide of the United goal.

Saints started the second-half brightly with Mason sending an effort over the bar on 50 minutes before McGrath dragged a strike wide four minutes later. On 58 minutes it was Cammy MacPherson's turn to go close to breaking the deadlock, but the St Mirren Academy graduate curled wide from the edge of the area. Tait wasn't far away either three minutes later when he lashed a low drive just past the post.

Jake Doyle-Hayes, making his first St Mirren appearance after completing his move to the Buddies earlier this week, had an opportunity with seven minutes remaining as he burst into the box and got his shot away only for it to be deflected wide.

With time ticking away the Saints bench were furious when referee David Munro failed to point to the spot when substitute Jon Obika appeared to be clipped in the box by Paul McMullan. It wasn't St Mirren's night with Jim Goodwin's side settling for a point in Paisley.