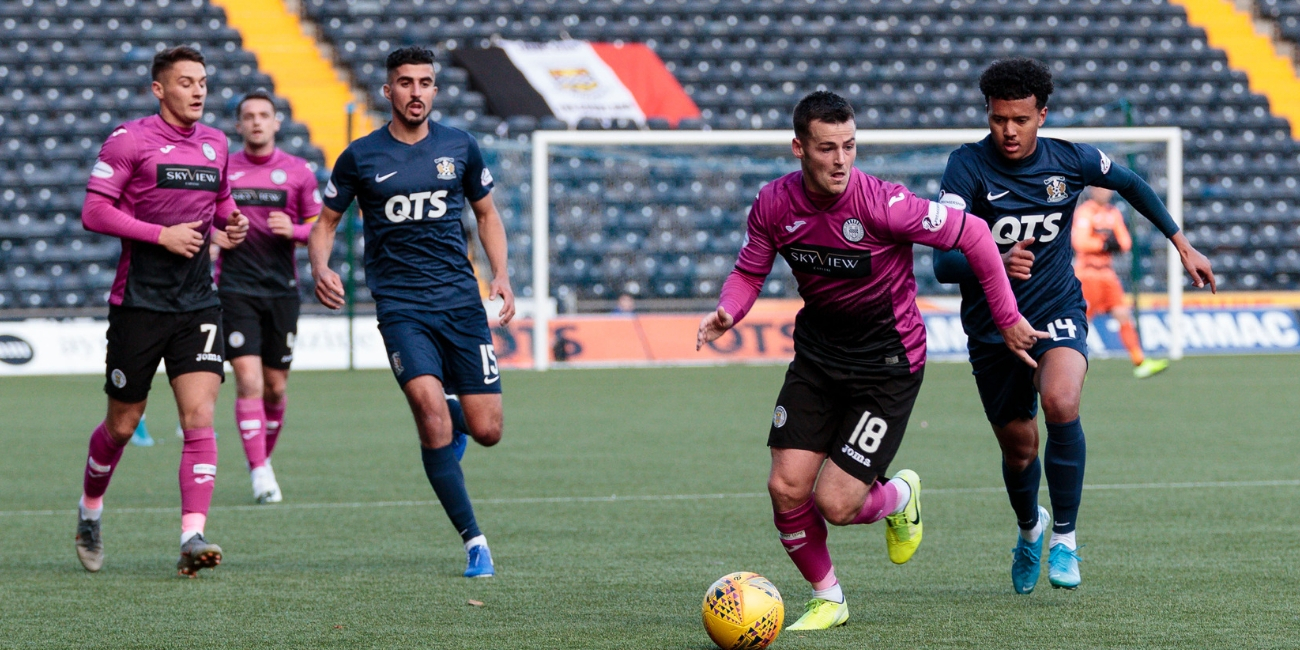 A late Gary Dicker header consigned St Mirren to a 1-0 loss at Rugby Park in the Ladbrokes Premiership this afternoon.

The Buddies created a number of chances and arguably deserved to take at least a point from the match, but left Ayrshire with nothing to show for their efforts.

Jim Goodwin was forced into one change from the side that defeated St Johnstone last week. Cammy MacPherson came in in place of Calum Waters who was ineligible to play against his parent side due to the terms of his loan agreement.

The opening exchanges were fairly even with neither side creating anything clear cut in the first 20 minutes. Eamonn Brophy had an effort smothered by Vaclav Hladky, while Kyle Magennis had a shot from 20 yards was blocked and Sam Foley sent an attempt over from the edge of the area.

Kilmarnock were forced into a change on 25 minutes with Alex Bruce coming on to replace Stuart Findlay who had to be stretchered off with what appeared to be a hamstring injury.

Seven minutes after coming on Bruce was lucky not to be penalised for a pull on Danny Mullen inside the Kilmarnock box. Saints were left frustrated at the decision not to award a penalty but Mullen did manage to get a shot on goal after wriggling clear of the defender but it was palmed away by goalkeeper Laurentiu Branescu.

Tony Andreu almost gave Saints the lead on 38 minutes. The Frenchman picked the ball up, drove in from the left and flashed a powerful drive just inches wide of Branescu's right-hand post.

The Buddies could have taken a lead into the interval but for a last-gasp block from Niko Hamalainen and Bruce to halt Jon Obika as the forward broke into the Kilmarnock box just before Willie Collum called time on the first-half.

Kilmarnock started the second-half brightly with Hamalainen firing a long-range effort into the arms of Vaclav Hladky less than two minutes after the restart.

But Saints were still creating opportunities with Obika flashing wide from the edge of the area before Branescu made a wonderful diving save to claw away a Mullen header. Kirk Broadfoot's long-ball into the box came off the head of Stephen O'Donnell and met Mullen who was denied by the Romanian goalkeeper at full-stretch. Mullen was up again less than two minutes later to meet a Paul McGinn cross but this one was easier for the Kilmarnock goalkeeper.

Andreu should have put Saints in front on 72 minutes when he got on the end of a terrific through ball from Obika but the Frenchman knocked wide from 15 yards out. Andreu, unfortunately, injured himself in the process and had to be replaced by Junior Morias.

With 12 minutes remaining the home side took the lead. Killie skipper Gary Dicker peeled away from Foley inside the box to meet a corner kick and bulleted home a header that proved to be the winner.

Substitute Chris Burke should have doubled the home side's lead with just three minutes remaining but missed from just a few yards out. In the end, Dicker's header proved enough to seal Kilmarnock the points.