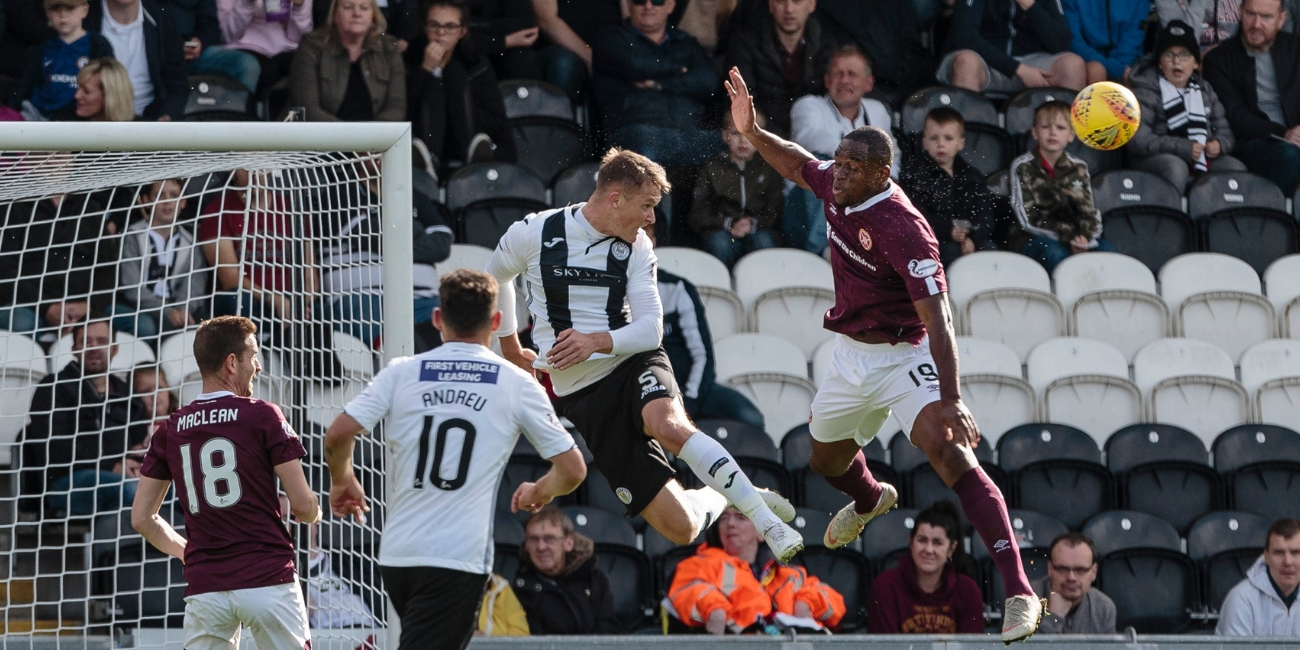 St Mirren had to settle for a point following this afternoon's 0-0 draw with Hearts at the Simple Digital Arena.

Both side had chances throughout the 90 minutes in an end-to-end contest that saw Tony Andreu have a first-half goal chopped off for offside.

Substitute Jon Obika almost won the game at the death for Saints, but a point was probably a fair result in the end.

Hearts came into the match on the back of a good week having beaten Hibernian in the Edinburgh derby last weekend, before qualifying for the Betfred Cup semi-finals on Wednesday night.

And the Jambos started the brighter of the two sides. Veteran striker Steven MacLean turned one just past the post on six minutes, before Michael Smith's piledriver from 35 yards drifted wide just a minute later.

Saints began to grow into the game and a good driving run from Kyle Magennis on 12 minutes saw Joel Pereira get a strong hand on the low ball across to deny the midfielder.

Just a minute later, Tony Andreu sent across a terrific ball from the right that just missed Ilkay Durmus who attempted to scissor-kick from 16 yards out.

Junior Morias could have gone one-on-one with the goalkeeper, but failed to beat the Hearts defender in his way. The striker did manage to feed the ball wide for Durmus whose ball into the box was knocked agonisingly wide by Magennis.

The Buddies thought they were in front on 26 minutes when Tony Andreu had the ball in the back of the net. The French forward picked up on a deflected effort inside the box and slotted home from close range. It was a late flag from linesman Douglas Ross, however, it appeared to be the right call.

Vaclav Hladky made a terrific block to deny Hearts substitute Christophe Berra as half-time approached. The experienced defender got on the end of a Jambos corner but the powerful effort was well denied by the Czech goalkeeper. Berra went close again just a few minutes later but his header was easy enough for Hladky.

Aaron Hickey tested Hladky two minutes after the restart, but the long-range strike was well held by the goalkeeper.

Both sides had opportunities throughout the 90 minutes, Tony Andreu fired over on 55 minutes before Hearts broke up the field and had a Callumn Morrison shot blocked by Calum Waters.

Good work from Sam Foley fashioned a promising opportunity as he slipped the ball into the box to find Durmus, but the winger sent  his shot wide.

Hearts should have scored with 15 minutes remaining when Uche Ikpeazu's terrific dinked ball caught out the Saints defence and found MacLean. Hladky was out quickly to close down the striker whose slight touch went over the bar.

Both sides would have a further chance each to win the game in the final moments. Ikpeazu struck wide from close range after getting on the end of a low ball from Jake Mulraney.

Jon Obika had the final chance of the match deep into stoppage time. The English striker was sent racing through by Danny Mullen and did ever so well to hold off three Hearts players to get a shot away that curled agonisingly wide of the far post.