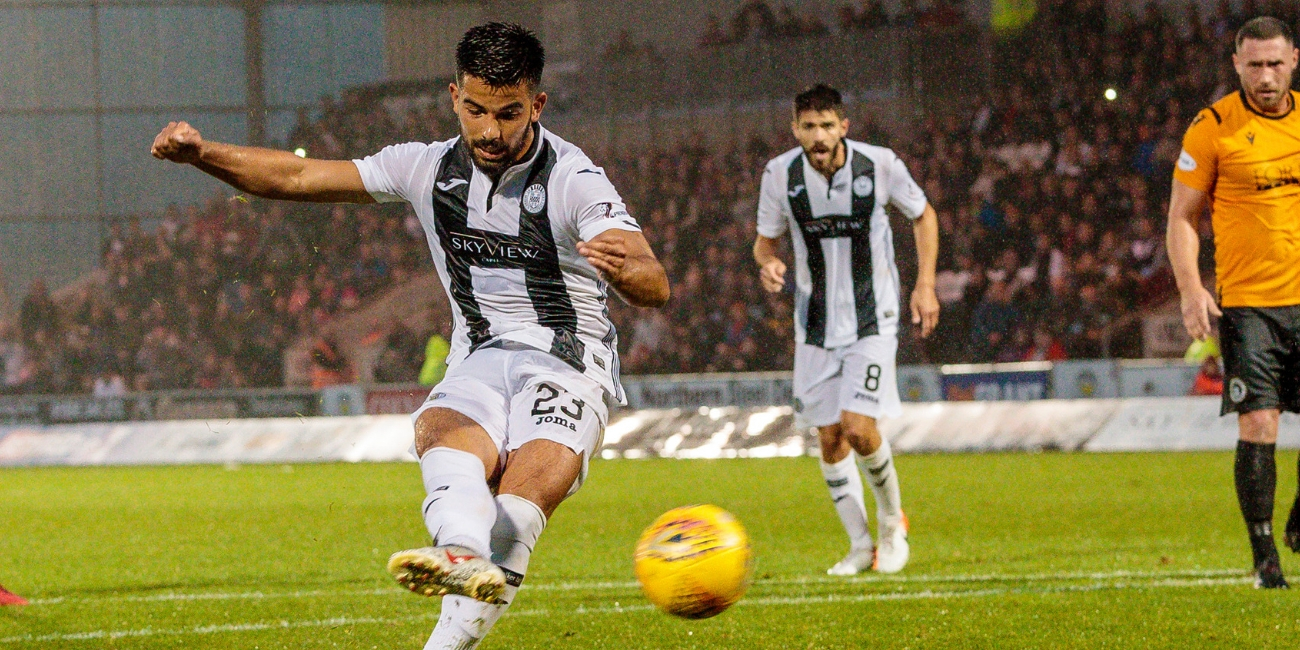 After a fairly quiet opening 70 minutes Saints upped the ante in the final 20 and made the breakthrough when Frenchman Djorkaeff netted from 12 yards after Paul McGinn had been fouled inside the penalty box in 89 minutes.

The win moved Saints into second in Group H ahead of Saturday's trip to K-Park to face East Kilbride.

Jim Goodwin made two changes to the side that lost to Dunfermline on Sunday with Cameron MacPherson and Oan Djorkaeff in for Ethan Erhahon and Danny Mullen.

Cody Cooke led the line for Saints and it was the Englishman who had the first opportunity of the match on 13 minutes with an audacious overhead kick at the far post that went wide.

Just under 10 minutes later Gary MacKenzie headed into the arms of Edinburgh City goalkeeper Callum Antell following Tony Andreu's corner. City broke forward at speed with Josh Walker finding himself in on goal. The Citizens skipper attempted to chip Vaclav Hladky but the goalkeeper was equal to the attempt.

Hladky was forced into another save just before the half-hour mark when MacKenzie slipped allowing the visitors a chance to run through on goal. Scott Shepherd fed the ball to Alex Harris on the edge of the area but his low curling effort was held by the Czech goalkeeper.

Jim Goodwin made two changes after 60 minutes in an attempt to find the opener with Ethan Erhahon and Danny Mullen coming on in place of Kyle Magennis and Tony Andreu.

The substitutes looked to have combined to give Saints the lead on 70 minutes when Mullen cheekily flicked Erhahon's ball across the box beyond Antell only for the linesman to rule it out for offside.

That did seem to spur the home side on with Cooke and Ryan Flynn both going close soon after. Cooke met a MacPherson cross first time with Antell doing well to block before the goalkeeper made a terrific save to push away Flynn's long-range volley.

While the home side were looking the more likely there was a scare for the Saints defence when substitute Allan Smith brilliantly brought down a ball over the top and got his shot away. However, the effort drifted wide.

Mullen had two big chances in the last 10 minutes to win the game for the Buddies. He first broke the offside trap to get a foot on a deflected Flynn effort. The Edinburgh defence stopped assuming the linesman's flag would be forthcoming. But it wasn't raised and the striker's touch was blocked by the goalkeeper. A few minutes later Paul McGinn did well to keep the ball in play at the touchline and sent it across the box to Mullen who flicked wide from close range.

St Mirren kept coming and it was Paul McGinn's determination to reach the ball ahead of an Edinburgh City defender that won the Buddies a penalty. The City defender tried to see the ball out but McGinn managed to get in front with the away stopper swinging a high foot and catching the full-back on the face. Referee Greg Aitken pointed to the spot and Djorkaeff, on his first start for the Buddies, stepped up to take and confidently dispatched of the ball sending Antell the wrong way and securing three Group H points for Saints.