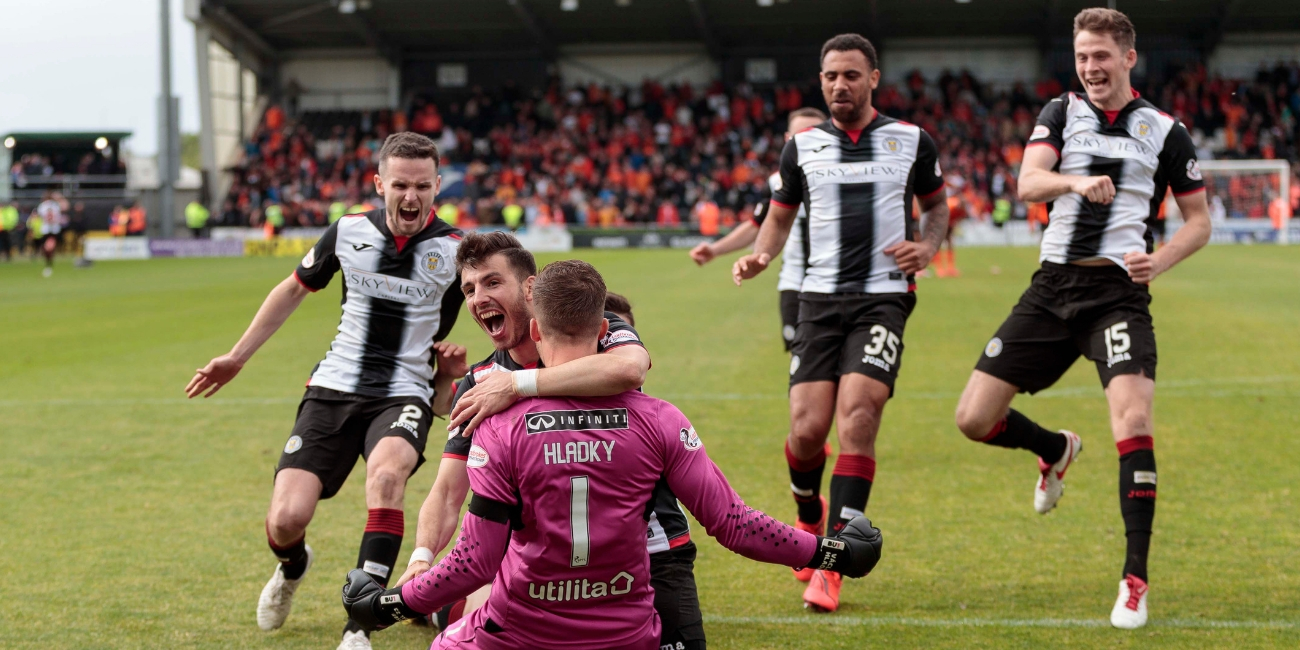 Saints will be playing Premiership football next season after holding their nerve to see off Dundee United on penalties in the play-off final.

The visitors had shown their prowess from the spot in the first half when Nicky Clark scored after Jack Baird was deemed to have handled inside the box. However, the lead didn't last long as a few minutes later Danny Mullen pounced on Mark Reynolds' mis-hit clearance to fire past Benjamin Siergrist.

That was the end of the scoring in normal time and there were no more goals in extra-time, although Saints did have sub Duckens Nazon sent off for a challenge on Mark Connolly.

And so it was on to the drama of penalties. Incredibly, United failed to convert any of the first three while Saints scored their first two. Mateo Muzek hit the post with his effort but when Vaclav Hladky saved Callum Booth's effort with his legs, it was party time in Paisley.

There was a tremendous atmosphere from the off with the Simple Digital Arena packed to capacity. Saints were first to threaten, a free-kick being cleared as far as Stephen McGinn who thumped it towards goal only for Siegrist to turn it away. When Mullen got in behind the United defence he had to wait what seemed an age for support to arrive and when it did, Kyle McAllister sliced his shot out for a throw-in. Moments later, Paul McGinn delivered a wonderful cross that Mullen couldn't quite get on the end of, although it didn't matter as the offside flag was already up.

It wasn't all Saints, United having enjoyed plenty of possession in the final third but unable to do anything with it. However, that was all to change midway through the first half. After some penalty box pinball, the ball sat up for Pavol Safranko whose shot took a deflection and looped up in the air. Hladky reacted brilliantly to turn it away but when Booth got onto the loose ball he smashed it against Baird's arm. Ref John Beaton wasted little time in pointing to the spot and Clark made no mistake as he tucked away the penalty.

The Saints response had to be swift – and it arrived within minutes. As Reynolds tried to make a relatively simple clearance he instead managed little more than a fresh air swipe and the ever alert Mullen was on it in a flash, drilling a first time shot past Siegrist to level things up. Things could have been even better a few minutes later when McAllister's shot found the bottom corner, but again the flag was up for offside.

The game was beginning to open up, Clark shooting over from Jamie Robson's cross as United tried to retake the lead before a fine run by Lee Hodson saw him tee up Kyle Magennis, however his shot always looked as if it was heading a yard or two over.

The start of the second half was equally frantic and Saints should have been front when they hit United on the break. Hodson released Mullen on the left and while his cross was too high for Cody Cooke it found the unmarked McAllister at the back post but he could only shoot into the side netting. Hladky did brilliantly to turn Paul Watson's header behind from a United corner before McAllister collected a wonderful cross field pass from Baird only to send his shot wide.

It was beginning to look as if it would be a mistake or a moment of magic that would decide it, Cooke nicking the ball as Booth was short with his header back to Siegrist but the keeper blocked the shot with his legs. The goalie was in action again seconds later as he did brilliantly to keep out Paul McGinn's header from Hodson's wonderful cross, Siegrist getting back up quickly enough to tip the spinning ball over the bar.

As the game entered its final stages United looked the likelier side to score, their fans behind the goal trying their best to suck the ball into the net. There was a blow for Saints in stoppage time as Gary MacKenzie, who had already taken a sore one to the head from Safranko earlier in the half, went down and this time it was the end of his afternoon as he was replaced by Anton Ferdinand.

As extra-time began it was another Saints sub who almost made the difference, Nazon's cross being diverted towards goal by United's Mark Connolly before a team-mate knocked the ball behind to safety. United sub Osman Sow dragged a shot well wide as he snatched at a chance before Siergirst comfortably saved an ambitious effort from Cooke.

The striker had the first chance of the second period, taking down Mateo Muzek's cross on his chest before his shot was deflected behind. An unlikely figure then nearly put Saints in front, Baird striding on to a lose ball before his long range shot was turned behind by Siegrist.

The Buddies were definitely on top and a glorious chance fell to Nazon after United duffed a clearance but he lashed it wide. The striker's brief afternoon was about to get much worse as when he jumped with Connolly, the United defender hit the deck. Mr Beaton felt an elbow had been used and showed Nazon the red card. That gave United some hope but they couldn't threaten and it was down to the lottery of penalties.

United went first, shooting into the Saints support, and Hladky kept out Peter Pawlett's effort. Paul McGinn scored his before Hladky was the hero again, this time denying Safranko. With Mihai Popescu making no mistake, Osman Sow had to score to give United any hope – but he could only hit the post. Muzek stepped forward knowing if he scored it was done, but he also hit the woodwork. However, it was just delaying the inevitable as Hladky stopped Booth's effort with his legs to secure Saints' survival and spark a pitch invasion of joy.

A few months ago Saints looked dead and buried but a fantastic run of form from February saw them narrowly miss out on 10th place before securing survival through the play-offs. It may not quite match the great escape of two years ago but Oran Kearney, his staff and players can be rightly proud of an incredible turnaround that means there will be Premiership football in Paisley next season.