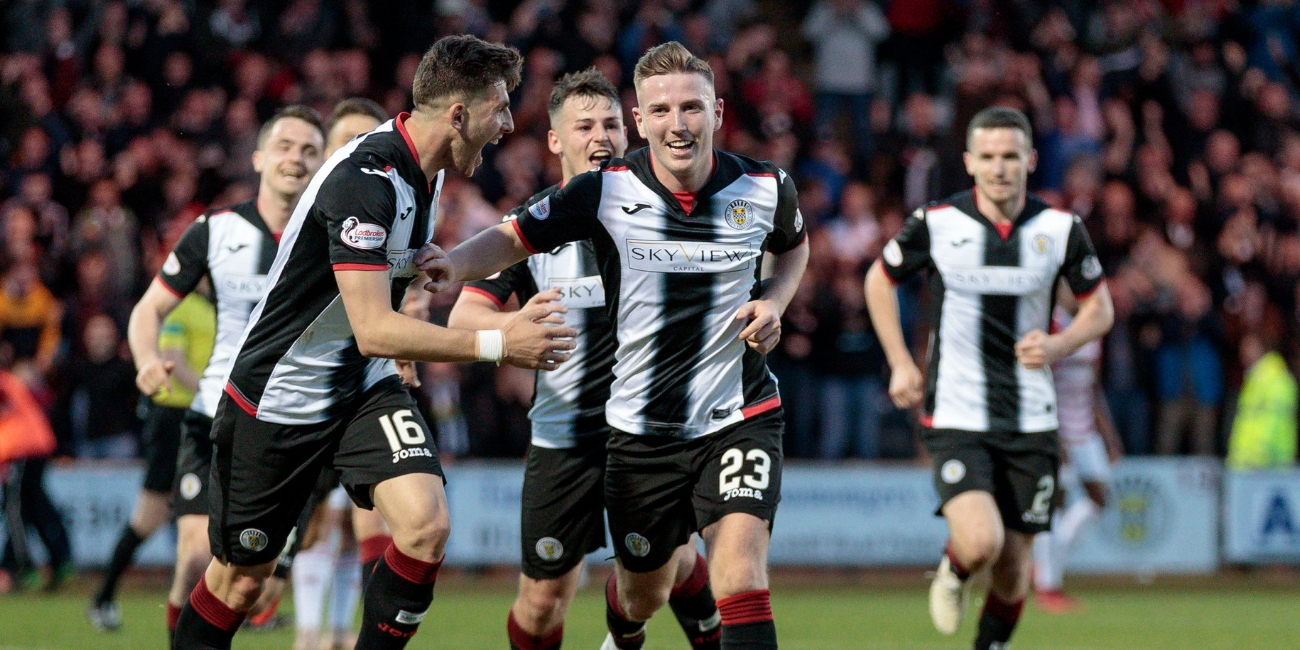 St Mirren will take the fight to finish 10th to the final day after a deserved 2-0 win over Hamilton Academical at the Simple Digital Arena.

Second-half goals from St Mirren Youth Academy graduates Kyle McAllister and Kyle Magennis wrapped up the three points with Saints still in with a chance of avoiding the Ladbrokes Premiership relegation play-offs.

It was all or nothing for the Buddies who knew they had to take all three points to have any chance of avoiding a play-off spot heading into the match. Oran Kearney made one change to the side that drew 1-1 with Motherwell the week previous with Magennis starting in place of Ryan Flynn.

It was, however, the visitors who should have taken the lead when a long ball from Accies goalkeeper Gary Woods found its way to George Oakley who raced through on the Saints goal. Buddies goalkeeper Vaclav Hladky was off his line quickly, but was rounded by Oakley who looked set to roll the ball into the back of the empty net. The English striker let the ball run too far and slammed over from a tight angle.

Saints immediately broke forward and could have been ahead when Paul McGinn's ball across met an unmarked Magennis in the box. The midfielder had time to take a touch but decided to take it first time and curled well over the bar.

Scott Martin had two chances in the space of a minute for the visitors but failed to make either count. The first saw him pounce on a slack clearance from Hladky. He picked up the ball around 40 yards from goal and had a go with the keeper stranded but sent it well wide. 60 seconds later he sent an effort from the edge of the box into the arms of the Saints goalie.

Hamilton's Aaron McGowan was lucky to escape a red card on 19 minutes after kicking out at Danny Mullen. The Saints striker was shielding the ball before falling to the ground. McGowan, who may have argued he was trying to get the ball, kicked out at the forward much to the anger of the Saints team. Referee Willie Collum raced across and booked the Accies defender, while he also booked Saints skipper Stephen McGinn for his remonstrations.

Accies would be reduced to 10 men 10 minutes later as Alex Gogic was given his marching orders for denying a clear goalscoring opportunity. Simeon Jackson was about to race clear on goal after getting on the end of a McAllister pass, though the Canadian was hauled to the ground by Gogic who was promptly shown a red card.

McAllister stepped up to take the resultant free-kick but sent it straight into the arms of Woods. Brad Lyons and Stephen McGinn had half chances before the interval as the Buddies looked to make their man advantage count but it would remain goalless at the break.

Mullen and McAllister both had sniffs at goal 10 minutes into the second 45 with the former heading over from a Mateo Muzek cross and the latter sending an effort high and wide.

10 men Accies had a big opportunity to take the lead just before the hour mark through substitute Mickel Miller. He found himself on the end of a flick on and charged into the box. Miller had Tony Andreu in the centre waiting for a pass but elected to go alone and dragged a poor effort wide of the mark.

Saints made a change on 61 minutes as Ryan Flynn came on in place of Brad Lyons and it was after the hour mark that the Buddies really stepped up a gear.

Mihai Popescu almost found the opener with a header on 63 minutes only to be denied by a terrific save from Woods. From the resultant corner Simeon Jackson headed over.

The Buddies were having all the pressure with McGowan having to turn over a dangerous Paul McGinn cross and Mullen having a shot deflected by for a corner. It seemed for a spell like it was corner after corner for Saints and while they all looked like they might yield something for the home side nothing was coming off.

With 15 minutes to go Saints finally made the breakthrough thanks to McAllister. The winger played a reverse pass with Paul McGinn and took the ball down well inside the box. He got his first shot wrong however though the block from an Accies defender found the ball back at McAllister's feet and he made no mistake second time around as he slammed low beyond Woods to give the Buddies a well-earned opener.

Woods denied McAllister a second with a good block with 10 minutes remaining, but Accies, who knew a draw would be enough to ensure their Ladbrokes Premiership survival, came at Saints. Dougie Imrie's chip into the box met Oakley who head towards Andreu. Hladky was brave to get in ahead of the Frenchman to claw away. But Saints couldn't clear their lines allowing Oakley a chance as he smashed just wide from 20 yards

Six minutes of injury time were added after an injury to Miller and Saints did well to keep control in stoppage time. Magennis rounded off a good evening for the Buddies as he made it two goals from two with a composed finish from inside the box after robbing Darian MacKinnon of the ball.

Hamilton still have the advantage heading in to the final day, but Saints have given themselves a chance of avoiding the play-offs and could do so with a draw or a win at Dundee depending on how Accies fair at home to St Johnstone on Saturday.