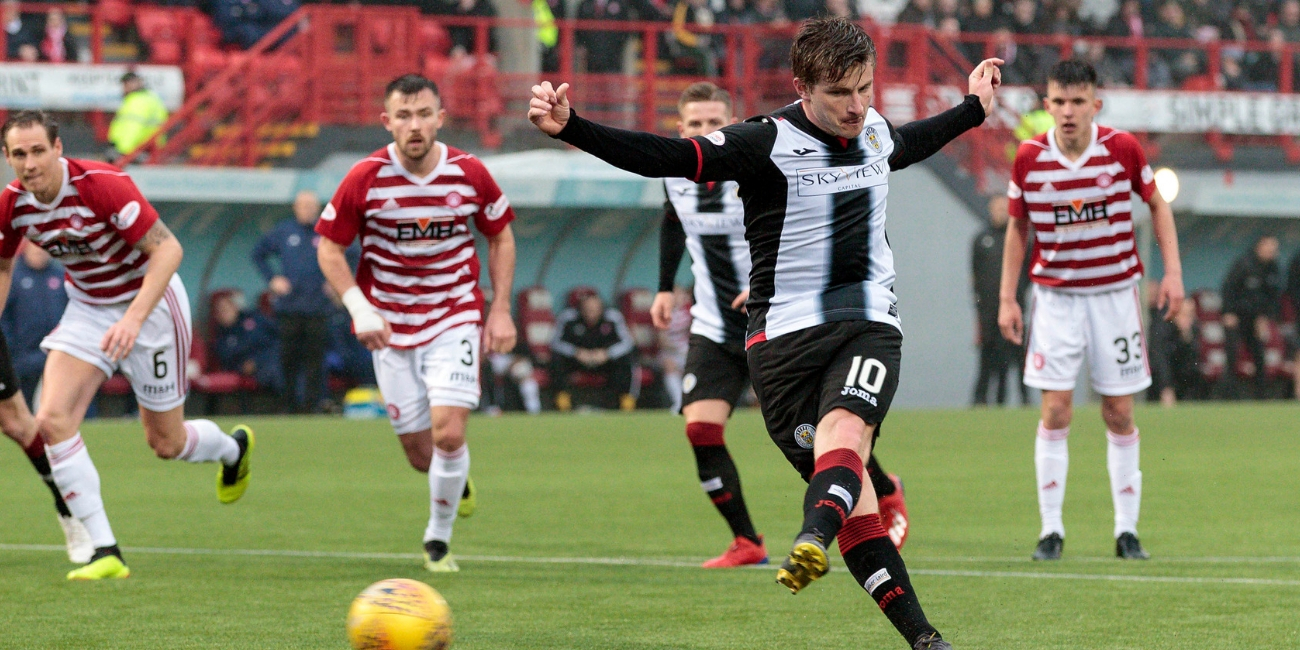 St Mirren picked up a point and extended the gap over bottom side Dundee to three points after a 1-1 draw with Hamilton Academical at the Hope CBD Stadium.

The Buddies arguably had the better of the match but fell behind on 63 minutes when Steven Davies opened the scoring for the visitors. Saints fought back though and were level just three minutes later when Anders Dreyer scored his first St Mirren goal from the penalty spot. Both sides had chances to win the game but in the end had to settle for a share of the spoils.

St Mirren shot towards the 1,700 strong Saints contingent in the first half and should have been ahead with just five minutes on the clock. Good pressure from Paul McGinn on Scott McMann allowed Brad Lyons to pick up on a loose ball. The midfielder had the goal gaping but took one touch too many allowing McMann to recover and get the tackle in before Lyons shot over at the second attempt.

Saints were adamant they should have had a penalty on 23 minutes when Anders Dreyer was wiped out in the box by Ziggy Gordon. The Danish forward had skipped into the box and sent a low ball across before being taken out. The Buddies were furious but referee John Beaton decided the challenge was fair.

Hamilton could have found themselves ahead five minutes later only for Vaclav Hladky to come to Saints' rescue. A loose clearance from Jack Baird was picked up on by Darian MacKinnon. The midfielder slotted a lovely through ball into Steve Davies who spun away from Baird, but Hladky made himself big to turn the effort wide.

St Mirren spurned a glorious opportunity to take the lead with five minutes of the half remaining. Simeon Jackson did well to get in ahead of Ziggy Gordon to win the ball and laid it off to Lyons who charged through on goal. The midfielder had Danny Mullen in space inside the box, but looked in two minds as he elected to go it alone and stabbed the ball wide.

Hladky was alert at the start of the second half as he turned an Aaron McGowan shot from the angle off the post just two minutes after the interval.

Indeed, Accies were brighter in the second half than they had been in the first and Hladky again made a good stop to deny Mickel Miller's effort with Ethan Erhahon on the line to turn away George Oakley's follow up effort.

Hamilton took the lead on 63 minutes. The Saints defence failed to clear their lines allowing Tony Andreu to whip a ball into the box where it met Davies. The forward got in front of his defender flicked home via the post with his left foot.

It was frustration for Saints who would have felt they should already have been ahead in the match. But the reaction was good from Oran Kearney's charges as they found themselves level just three minutes later. Anders Dreyer was felled inside the box by Ziggy Gordon and this time referee John Beaton pointed to the penalty spot. The Dane stepped up to take and sent Accies goalkeeper Gary Woods the wrong way to restore parity.

Both sides had a go to try and find a winner but the only clear cut chance for either came in the dying embers when Hladky made a wonderful stop to push away Oakley's volley with Baird on the line to clear away Andreu's header after the Frenchman had Hladky beaten.