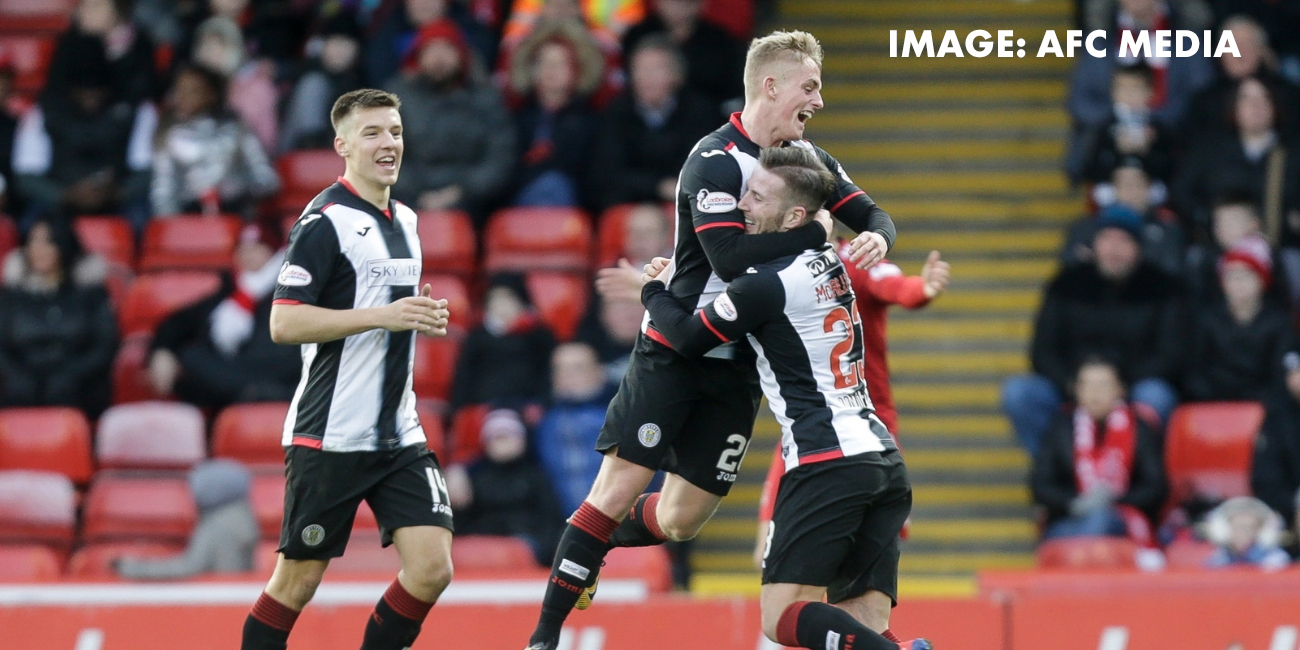 St Mirren picked up a valuable point at Pittodrie this afternoon following a 2-2 draw with Aberdeen.

Oran Kearney's side twice took the lead with Duckens Nazon and Kyle McAllister on target either side of half-time, but the Buddies had to settle for just a point in the end.

Saints started brightly - winning a few corners in quick succession in the opening few minutes without being able to create from them.

But from a corner on 19 minutes, Paul McGinn would win the penalty kick that got the opener. There was no arguing referee Craig Thomson's decision as McGinn was hauled to the ground by Sam Cosgrove who had wrapped both his arms around the stand-in captain. Duckens Nazon stepped up to squeeze the ball home into Joe Lewis' right hand corner. The Dons keeper went the right way, but couldn't deny the Haitian international his second goal for the Buddies. After a few ropey starts at Pittodrie in recent times it was the perfect way to get things underway.

But nobody has to warn Saints of the danger the Dons pose at their home ground and they went in search of a quick equaliser. Buddies goalkeeper Vaclav Hladky was brave on 25 minutes to block an effort from Greg Stewart with his feet. The two players colliding and had to receive treatment in the aftermath but were able to continue.

Aberdeen continued to threaten and just after the half hour mark a dangerous looking Max Lowe ball into the box was only just turned behind by Jack Baird. Then initial corner was knocked out for another by Saints but Aberdeen would find themselves level from the second. The Dons took it short to Gary Mackay-Steven whose cross into the box was flicked on by Michael Devlin and nodded home by Lewis Ferguson at the back post.

Buoyed, the home side should have taken the lead three minutes after their leveller. Greg Stewart picked out Niall McGinn in acres of space inside the Saints box, but the unmarked forward somehow skied it from just a few yards out when it looked like he might burst the net.

Aberdeen were on top at this stage but their momentum was halted after an injury Tommie Hoban as the game ebbed towards half-time. The defender went down under no challenge and was screaming in agony on the deck.

The Buddies nearly found themselves back in front almost immediately after the interval. There was less than two second half minutes gone when Kyle McAllister's cross picked out Brad Lyons who glanced his header just inches by the post with Joe Lewis scrambling across his goal-line.

After having already made two changes at the break with Ethan Erhahon and Simeon Jackson replacing Mateo Muzek and Duckens Nazon, Saints were forced into a final change just before the hour mark when Anton Ferdinand was injured after putting his body on the line to block an Aberdeen attack.

St Mirren took the lead for a second time. The Buddies picked up on a loose ball from Aberdeen in the middle park and broke forward at speed. Brad Lyons found McAllister scuttling down the right wing. The 20 year-old winger drove into the box, cut in onto his left foot and smashed the ball into the far left corner to make it 2-1 to Saints.

The Buddies went in search of a third and would have felt aggrieved that the offside flag denied McAllister a chance to go one-on-one with Lewis despite the winger being onside. The third almost came a few short moments after that though when substitute Jackson got the better of Devlin on the left hand side. The Canadian striker worked his way into the box, wriggling away from Devlin and was so unlucky to knock the ball just wide from a tight angle.

Saints would have to settle for just a point though when Aberdeen equalised with a little over 10 minutes to go. Saints goalkeeper Vaclav Hladky will have been disappointed he couldn't keep Cosgrove's low effort out as the striker swept home from a cross on the left.