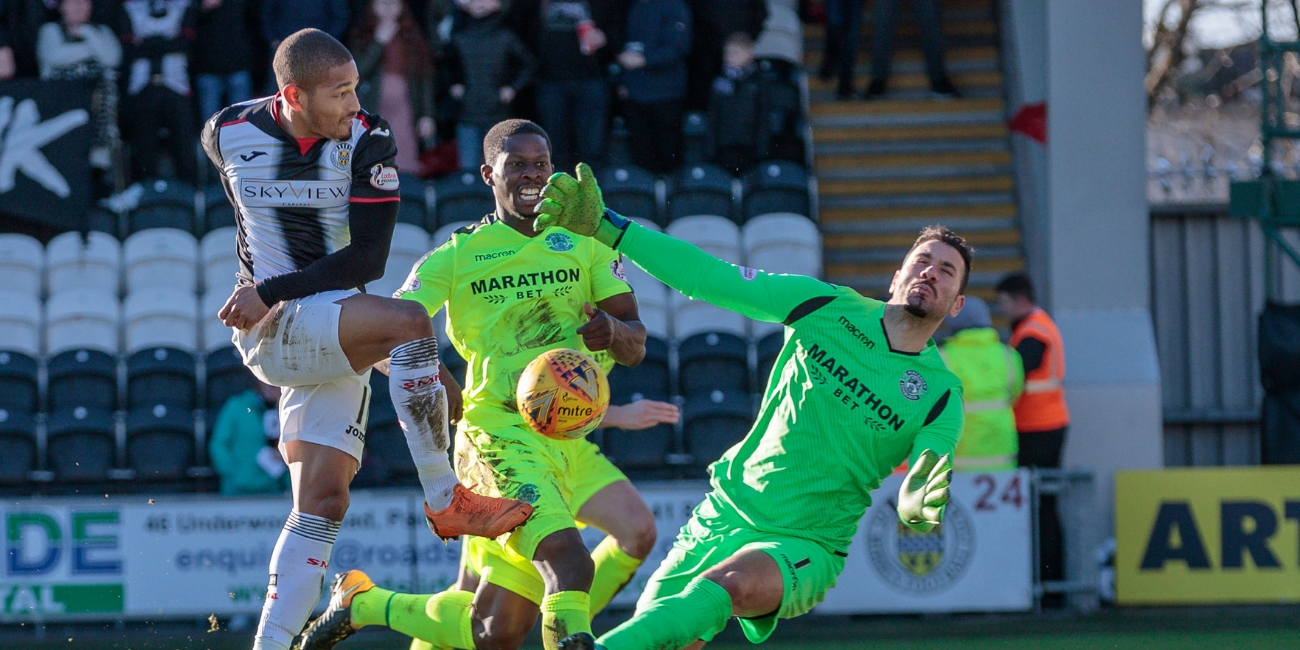 St Mirren missed up a golden opportunity to move out of the bottom two as they lost to Hibs at the Simple Digital Arena.

The Buddies deservedly led at the break as Simeon Jackson clinically finished off a cross from Brad Lyons. Seconds after Kyle McAllister had a great chance to double the lead, Oli Shaw struck to draw Hibs level.

Mallan had an early chance to show his set-piece ability when he was fouled just outside the box by Stephen McGinn, the midfielder's free-kick hitting the wall and going behind for a corner that came to nothing. Jack Baird then did well to snuff out the threat of Daryl Horgan after a tremendous through ball by Ryan Gauld, David Gray heading over from the corner that followed. Stephen McGinn had been in the wars a bit but when a Saints free-kick was nodded back out of the box he decided to have a crack, unleashing a thunderbolt that was blocked.

Minutes later the Buddies took the lead. Lyons did well to evade McGregor to get to the byline and his fine low cross evaded the Hibs defence, Jackson rushing in to hammer it past Ofir Marciano for the Canadian international's first Saints goal at home. As the visitors tried to respond, Gray was booked for sliding in on Vaclav Hladky as the Saints keeper rushed out to gather a through ball. Mallan then tried his luck from his usual sort of range but the shot was always drifting well wide.

Jackson had as great chance to double his tally when Greg Tansey's free-kick was deflected into his path, the striker seeing his shot tipped away by Marciano. Jackson headed wide from Stephen McGinn's cross as Saints kept up the pressure, however they nearly conceded just before the break as Horgan pounced on a slack pass and set his sights on the bottom corner, Hladky doing well to tip his shot away before Florian Kamberi was flagged offside as he tried to pounce on the rebound.

Lyons and Jackson almost combined again in the early stages of the second half, Jackson just unable to get his head on Lyons' teasing cross. After Lyons sent a shot well over Hibs made what proved to be a pivotal change, a visibly limping Horgan being replaced by Shaw. Jackson pulled an effort wide before Tansey set up newboy Anders Dreyer at the edge of the box but he blazed his shot over.

Hibs had barely threatened since the break but Gauld almost drew them level as he nipped the ball away from a hesitant Stephen McGinn before drilling a shot wide from 20 yards. It seemed to provide some hope for the visiting fans behind the goal and their side began to put Saints under real pressure for the first time, Hladky turning Marvin Bartley's shot behind for a corner. From that the Buddies broke and McAllister passed up a golden chance to put the hosts two in front. As shouts for a foul fell on deaf ears, Marciano scuffed a clearance off the winger who then managed to get the better of the keeper. With the goal gaping, McAllister delayed his shot just enough for the grounded Marciano to narrow the angle and when he did get his strike away it was trundling off target before Bartley hacked it away.

It was to prove costly as Hibs equalised immediately as Mallan slipped a fine ball through to Shaw and, the sub slotted it under the onrushing Hladky to bring the sides level. It was then down to a former Buddie to put the Hibees in front – but probably not the one you'd have expected. Kamberi's header at a corner was blocked by Paul McGinn but the ball sat up invitingly for McGregor, who showed the predatory instincts of a striker to stab it high into the net.

Saints were shaken but weren't going down without a fight. Ethan Erhahon's cross was nodded back into the mix and when Jackson's header was half-cleared, Stephen McGinn thumped it towards goal only for Marciano to save it and McGregor to clear away Jackson's follow-up McAllister was next to be denied, a corner being cleared as far as the winger whose fine shot was kept out by an even better save by Marciano.

Any hope of Oran Kearney's side salvaging something was wiped out a few minutes from time. Gray found Shaw with a fine ball and when he played it inside, Mallan stroked it into the bottom corner. The former Saint almost rubbed more salt into the wound in what little time remained as he flashed a shot just wide but the damage was already done, the Buddies somehow ending up with nothing from a game they looked perfectly placed to win.