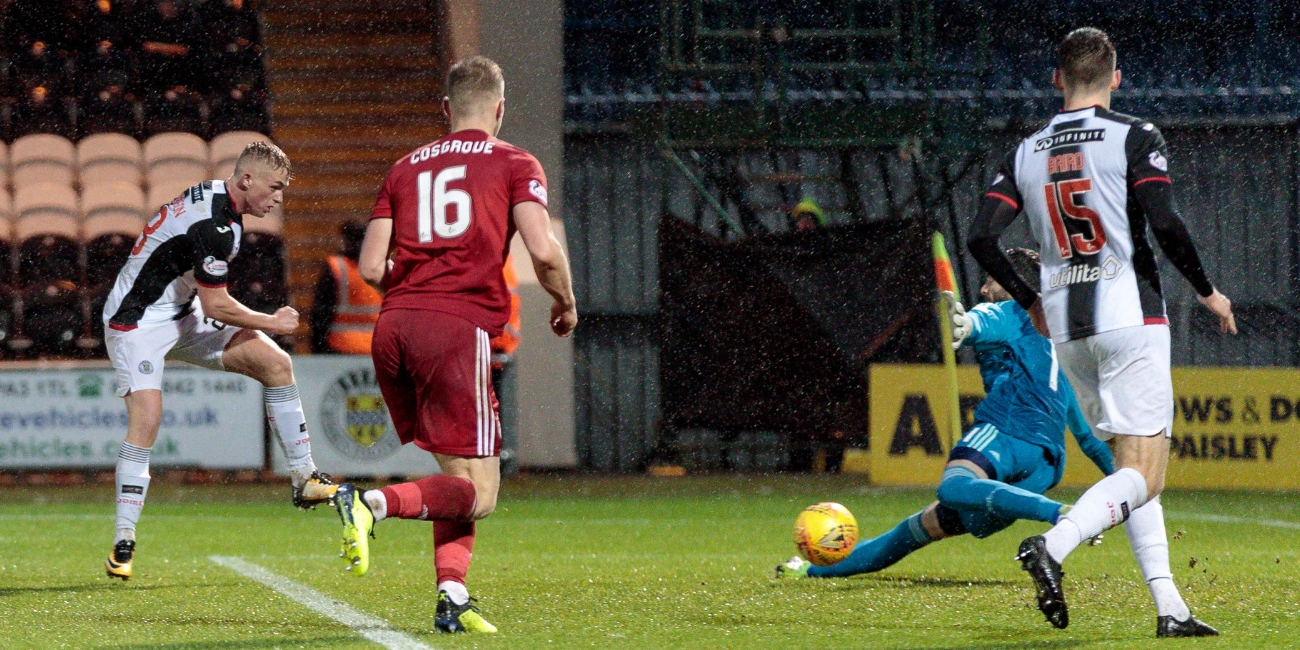 St Mirren were edged out by Aberdeen at the Simple Digital Arena this afternoon as the visitors picked up all three points in a narrow 2-1 win.

The Dons took a first half lead from the penalty spot through Stevie May, but Cammy MacPherson scored his first St Mirren goal five minutes later to draw Saints level. Despite the Buddies' endeavour, Sam Cosgrove's 61st minute header sealed all the points for Derek McInnes' Aberdeen side.

It was an even opening with neither side creating anything clear cut in the first 25 minutes. Stephen McGinn twice almost sent Simeon Jackson one-on-one with Joe Lewis but the offside flag thwarted the Canadian striker, while Sam Cosgrove shot harmlessly wide for Aberdeen.

The first real opportunity came just before the half-hour mark when Aberdeen were awarded a free kick right on the edge of the St Mirren box. Niall McGinn curled towards the top corner only for Saints debutant goalkeeper Dean Lyness to wonderfully tip over to deny the Northern Irishman.

But Saints were undone from the resultant corner. Alfie Jones was penalised for on Andrew Considine and Aberdeen were awarded a penalty. Stevie May stepped up and sent Lyness the wrong way.

However, St Mirren were level just five minutes later as Cammy MacPherson scored his first ever St Mirren goal. A foul on Simeon Jackson by Scott McKenna drew a free kick around 30 yards from goal. Adam Hammill sent the ball into a dangerous area in the box where MacPherson took a touch before rolling past Joe Lewis to equalise.

Saints seemed keen after the break with Jackson finding Ryan Edwards in space inside the box soon into the second half but the Australian's shot from a tight angle was straight at Lewis.

Aberdeen proved they were still a major threat with Lyness making another superb save to deny May a second after the striker was slipped in by Cosgrove.

The Dons did get a second on 61 minutes as Cosgrove grabbed what would prove to be the winner. Lyness made another excellent stop to push Considine's header from a McGinn free kick on to the bar. English striker Cosgrove reacted quickest to nod home from close range.

Saints huffed and puffed in an attempt to find a second equaliser but were unable to with Dons returning to the North East with the points.