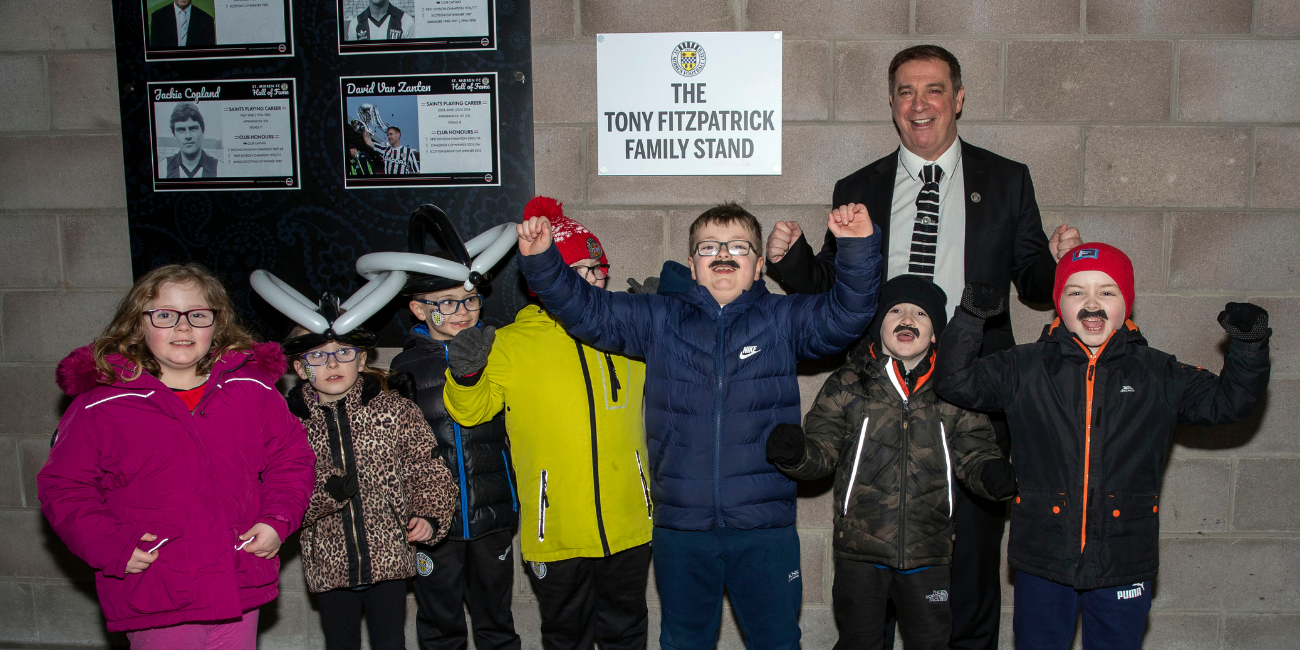 Tony Fitzpatrick: We will all come through this together

St Mirren Chief Executive Tony Fitzpatrick has thanked fans and the local community for their support of the club and vowed that the club will continue to play their role in the community at this difficult time.

The Scottish Football Association announced yesterday that football in Scotland would not resume before April 30th and clubs remain in limbo with regards to whether the 2019/20 season will return.

Tony admitted he's been heartened by the amount of support the club has received in the form of letters, emails and phone calls from the local community, but stressed that while the club is facing an uncertain period like all businesses there is no immediate threat.

Speaking to stmirren.com, Tony said: "There is a lot of uncertainty and the club is like any business just now.

"There's a bit of trepidation but as was mentioned in our statement the other day the club is in a reasonable enough position to deal with this at the moment.

"There are no thoughts of cutting anybody's wages or making anyone redundant. We don't know how long this will last so we will continue to monitor the situation as things go on.

"These are difficult times but I also think this is a real chance for us to really reflect on everything at the club. One of the major things that has come out of all of this for me is what St Mirren means to the community and what the community means to St Mirren. You have the St Mirren FC Charitable Foundation, you have Street Stuff who do marvellous work and the Kibble also. These are organisations that are helping.

"People were stopping me in the street and asking if the club was going to be okay. We've had numerous phone calls and letters coming in from supporters asking how they can help and telling us if the season is finished that they wouldn't want a rebate on their season tickets. Some of that money will be used to help the community over the coming weeks and months.

"It's a big opportunity for us to give back and we are a family, community club. It's times like this that you have to give back. I go back to the amazing work that the Charitable Foundation, Street Stuff and the Kibble all do. They are all part of the club."

With the football on hold until at least the end of April, Tony said that all non-Scottish players have been allowed to return home to their families.

All players have been given individual fitness programmes, while those still in the country have said they will play their part in helping out in the community.

"The manager has taken the decision to let all the foreign players go home to their families and it was the right decision.

"With football postponed until at least the end of April, players will work towards being back at that date and hopefully by then we may have got on top of this. Of course we might not have and we might have to postpone things further. They have all been given an individual training programme to keep on top of their fitness.

"The players who are still here have put themselves forward to help in any way they can. Whether it's just speaking to people on the phone or delivering messages, everyone at the club is up for it. St Mirren means so much to the community and the community means so much to St Mirren. If there is one good thing that comes out of all of this is that it's going to bring us all closer together.

"The positive for me is the way the community have responded to us and the way we have and will respond to the community."

With some players out of contract at the end of the season, Tony says the club will look to offer new contracts to some players while honouring the commitments it has to players.

And despite the uncertainty Tony says the club will continue to work hard in the background to make sure the club are ready for whenever football returns.

The board has been together quite a bit to discuss everything at the club. We have a number of players who are out of contract at the end of the season and we have loan players. We'll obviously honour all those contracts and there are players in there that we would like to offer new contracts to.

"Jim [Goodwin] will also have had a list of players that will be out of contract that we'd have been looking to sign in the summer and we are constantly discussing that.

"It's on hold a bit just now as we aren't sure where we are at with things but I'm a great believer that if we put the right plans in place and we keep working away then we'll be ready when this all passes.

"The SFA has unlocked some of the money for the academies which will help.

"We will need to wait for a decision from the SPFL in terms of how the league finishes and whether they will pay clubs on the basis of where they currently sit in the table. These organisations care about the clubs and there have been plenty of meetings that have taken place and hopefully they'll be able to come to some sort of decision soon."

Tony also praised the St Mirren Youth Academy staff for their work in keeping youth players engaged while they are unable to come into training.

Allan McManus and his staff at the academy have also come up with some fantastic plans to engage with the kids while they can't come in. This is a real opportunity for them to practice.

"It has made people think of different ways to keep the kids engaged, to keep their parents engaged and keeping the fans engaged and hopefully we are doing all these things. We will all come through this together."